This essay was first published on Fourth & Sycamore. 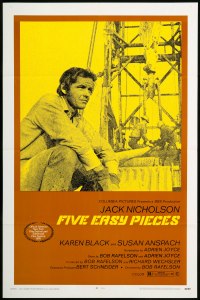 So far in our Third Floor Film Series we’ve watched Alfred Hitchcock’s 1958 film Vertigo, the groundbreaking 1967 Bonnie and Clyde directed by Arthur Penn, and Elia Kazan’s steaming 1951 A Streetcar Named Desire. May’s film will be Five Easy Pieces from 1970. The film was directed by Bob Rafelson and turned Jack Nicholson into a bonafide star. Our screening will take place Thursday, May 14, at 7:00 pm.

Five Easy Pieces is an impressively good movie. That might seem an obvious place to start; we’ve watched nothing but good movies in the Third Floor Film Series. But it’s something that seems necessary to establish for a movie that slips under the radar for a lot of casual movie lovers today, and one that doesn’t have the patina of great age to solidify its credentials (though I had to point out to an attendee that the movie is a dozen years older than I am after she exclaimed, “But that’s not an old movie!” when I announced the screening). The movie doesn’t feature any beloved, now-departed stars from the golden age, it didn’t bristle against the Code (dead and buried by 1970), it wasn’t directed by a name many people know nowadays (though Bob Rafelson was an important New Hollywood director), and it isn’t in black and white or early color. What it is is a very, very good movie.

While John Cassavetes was really the first director to pioneer what we now recognize as the independent cinema style, breaking from the big studio flicks and polished dramas of the day, Five Easy Pieces is the movie I think of when I think about the shaping of indie film. The movie is quiet but intense, focuses on its characters and their choices rather than a purposeful plot, and doesn’t pay off with a happy, romantic ending. While aspects of the story are exceptional, no part of the movie feels false.

The film tells the story of Bobby Dupea (Nicholson), a worker on the oil rigs in the California oil fields. He bowls, drinks cheap beer, plays poker with his coworkers, gets in a fight, disrespects his somewhat dim girlfriend, Rayette (Karen Black), flirts and sleeps with another woman, and seems like a completely average working class male from Central Screenwriting, though he is of course brilliantly acted by Nicholson. We discover there is something more to Bobby when, angry that he and a coworker are stuck in a traffic jam on the way to work, he hops onto the back of a moving truck and begins playing a raucous tune on the upright piano strapped to the bed. We had no idea he could play. Where did he learn? Why hasn’t he been using this to score women or impress his friends?

“It is difficult to explain today how much Bobby Dupea meant to the film’s first audiences. I was at the New York Film Festival for the premiere of ‘Five Easy Pieces,’ and I remember the explosive laughter, the deep silences, the stunned attention as the final shot seemed to continue forever, and then the ovation.” – Roger Ebert, rogerebert.com

With little fanfare the movie reveals more when Bobby walks into a recording studio and waits for the classical pianist to emerge from her sound room. It’s Bobby’s sister, Partita, who tells him their father is sick and Bobby should come home to see him before it’s too late. Reluctantly, Bobby loads up Rayette (he’d far prefer to leave her behind but she’s having none of it) and drives to Washington state. He deposits Rayette at a hotel and takes a ferry to the island where his family of musicians live communally. There is the patriarch (William Challee), now unable to speak, Carl, a socially stiff violinist with a sprained neck, Partita, Spicer, a male nurse who cares for the dad, and Catherine (Susan Anspach), an ethereal young pianist who has followed Carl to learn from him but seems uninspired by the man. She and Bobby recognize an attraction between them, but also a clash of refinements. Bobby is decisively common where the Dupea tribe is pretentious. When a pompous mystic philosopher visits and speaks in condescending pseudo-intellectual gibberish, putting down Rayette (who has shown up unexpectedly by taxi), Bobby blows up and tells the woman she isn’t even in the same class as Rayette. He has little but disdain for his girlfriend. His outburst is more about the snobbishness he’s rejected and the blue collar life he’s chosen than about any special protectiveness he feels for his girlfriend. Catherine and Bobby sleep together, but she tells him they have no future, because he does not seem capable of love. 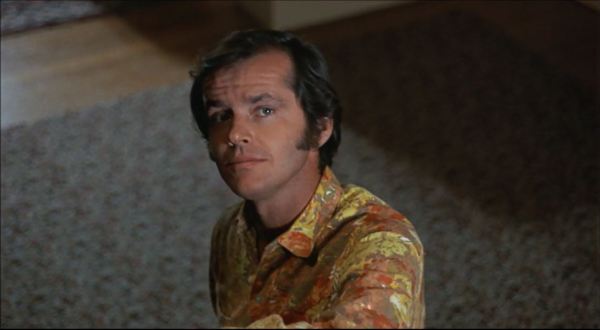 We have plenty of story outlines prepared for total failures. We have stories prepared for average Joes, and for geniuses. We don’t have many story templates for people who land in the upper percentiles of talent but fall short of genius. To be good enough at something to know you’ll never be among the best at it could drive a certain type of personality nearly mad. We have little use for the mediocre, for the above-average but forgettable. Bobby seems to have chosen the route of putting as much distance between himself and his talent as possible. One gathers he does this more to hide from himself as he does to hide from his mildly-neurotic and silently disappointed family.

So he slugs cheap beer, slugs his friends, can’t bring himself to slug his woman but probably thinks about it because he would feel more legitimately working class if he did. This is a truer, more natural version of what the cartoonish, child-men of Fight Club would search for thirty years later. Instead of a perverse cult paying homage to the ghost of American masculinity as in Fight Club, Bobby is just trying to live as he thinks the “average” man should. He gives himself permission to be crass, hedonistic, horny, profane, verbally cruel. He doesn’t want to believe he’s above it, because it would remind him of what he’d still be below. 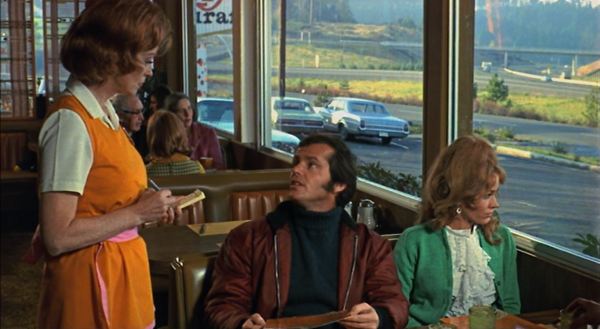 Please join us Thursday, May 14, at 7:00 pm to watch this excellent film. As always, free popcorn, candy, and soft drinks will be provided, and I’ll be leading a short discussion when the movie is over. We’d love to see you there.