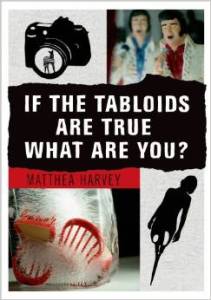 Matthea Harvey’s new book If the Tabloids Are True What Are You? (811.6 Harvey) is possibly too clever for its own good, and I have no idea what it’s about. Naturally, I like it very much.

Released by the always cool Graywolf Press, this is the sixth volume of poetry from Harvey, a Sarah Lawrence College professor andmultitalented artist. Tabloids lays out like a scrapbook, a hodgepodge of various textual formats and visual expressions. The cover art includes a camera, and this book does sort of play like a snapshot of Harvey’s talents, a selfie of an artist’s sweeping creativity during a given period of time. The book feels, in fact, like a social media feed – a Tumblr or Instagram from someone too cool to fall into those mediums’ more annoying cliches. There is photography, a Shakespearean sonnet about the Michelin Man, doodles, bizarre silhouettes of mermaid/utensil hybrids, free verse, embroidery. You get the sense the book is a download of Harvey’s intuitive functioning, an output organized by internal rules that make very little sense outside the context of the owner’s mind. It’s a little messy, a little disorganized, a little unbalanced; but for what Harvey is doing here, that’s not such a bad choice.

Tabloids carries an overarching feminist angst refracted and chopped and reordered through an abstract lens. The book begins with a section of prose poems about mermaids with titles like The Homemade Mermaid or The Morbid Mermaid, each one with a matching silhouette of a mermaid with some sort of utensil instead of a tale – scissors, a spork, a hammer. In an interview with The Paris Review Harvey expressed her fascination with the mermaid as a being that is highly sexualized but cannot have sex. One can easily see how this serves as a commentary on the way our patriarchal society continues to maintain a virgin/whore dichotomy that limits female expressions of sexuality while simultaneously projecting/demanding sexual allure from women.

Another section, titled “On Intimacies,” contains poems in which family and family members are imaged as animals. Perhaps my favorite poem in the book, My Octopus Orphan, begins,

My Octopus Orphan
thinks his suction cups are radios.
He presses them to his head and
it’s always Ma playing on AM,
Father on FM.

It continues for a bit and then concludes poignantly with:

I know it’s an aquarium
cliché, but I buy him a tricked-out
shipwreck from Goldfish Utopia.
sometimes he squashes himself inside,
leaving only his hard beak on deck
and the only way to lure him out
is with his favorite snack of snails.
He sure knows how to look lonely.
Though I hold it in the water long
enough, he never takes my hand.
He understands: there was the sea, then me.

A longer narrative poem titled Inside the Glass Factory is ethereal, telling the story of a group of girls who live and work in a glass factory making a variety of trinkets of unknown necessity and by unknown compulsion. They make a glass girl one day, imbuing her with action and life, and she escapes. They follow her; it is the first time they have been outdoors. They return, willingly, without their creation.

Not one finger here has ever felt fur,
seen veins or bones except under
the cover of skin, but they bypass
all that with the force of their dreaming –
how best to make her glass hair seem to
stream down her back, whose forefinger
they should choose to dent in her dimples.

Is this commentary on the aforementioned patriarchy’s preferences for artificial delicacy from women and girls, or is it simply a fanciful and haunting fairy tale told with gentle morbidity? Perhaps the brilliance of the piece is that it works on both levels, however you choose to read it. It made me think of one of my favorite paragraphs from Margaret Atwood’s dystopian feminist classic The Handmaid’s Tale (Fic Atwood):

“I lie in bed, still trembling. You can wet the rim of a glass and run your finger around the rim and it will make a sound. This is what I feel like: this sound of glass. I feel like the word shatter. I want to be with someone.” – page 103, The Handmaid’s Tale

The book’s final section, a longer poem titled Telettrofono accompanied by curious embroidery, lost me a bit, and tugs down the final stretch of the book. I attribute this mostly to myself; I trust there will be those who pick up its frequency and hum along. For me it was too oblique, and dragged on too long. It’s a minor complaint.

I don’t know modern poetry as well as I would like to, and this book makes me want to go back and catch up on Matthea Harvey’s previous writings. It’s a strange volume, but strange is not a negative descriptor for the adventurous reader. Strange can be lovely; strange can be a jolt to the monotony of the scenery our minds get used to. I’d love for you to check out If the Tabloids Are True What Are You? and tell me how this strange book affected you.