“When I retired from gender, it was because I came to the realization that the gender binary was what had been failing me all along. It’s hard to imagine that any one person finds that their place in the binary fits them without some measure of discomfort. Since my ‘retirement,’ I have been striving to stop gendering things for myself and for other people.” – Rae Spoon, Gender Failure, page 18 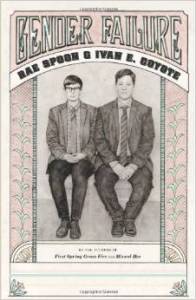 Musicians, authors, and storytellers Rae Spoon and Ivan E. Coyote are self-proclaimed gender failures, but their new book from Arsenal Pulp Press titledGender Failure (306.76 Spoon) demonstrates that it is a society that insists upon enforcing the strict rules of a gender binary that has failed, not those individuals who don’t fit inside those lines. Having spent time identifying as masculine, feminine, gay and straight and never really feeling at home anywhere, both have ultimately decided to retire from gender altogether, finding homes outside society’s gender strictures. They both request to be referred to individually with third person plural pronouns, and if you have a problem with it, Rae points out that no lesser founding father of modern English than Geoffrey Chaucer used the third person plural to refer to individuals, so you can keep your grammatical complaints to yourself.

Rae was assigned female at birth, meaning they were born with a female body, into a Pentacostal Christian family. Conservative Christianity’s teachings on gender roles and norms can be problematic even for those who don’t struggle to fit into the gender binary, and it was even worse for Rae. They spent time as a teen and young adult identifying as lesbian, unaware that identifying as anything but their assigned sex was even an option until their early twenties. Rae came out as trans in 2001 and identified as a man for many years before ultimately retiring from gender altogether.

Ivan was also assigned female at birth, and has likewise spent the decades of their adult years navigating several of the labels and personas available along the LGBTQ spectrum. They spent many years identifying as a man, and have now likewise retired from gender. They explain it best in one of final chapters of Gender Failurethusly:

“So here it is. My friends call me he, or they. The government and most of my family call me she. The media calls me she, because I don’t trust them enough to request that they do anything else. My lovers call me sweetheart. Or baby. Somewhere in all of that I find myself. These are all, after all, only words.” – Ivan E. Coyote, page 224

Gender Failure sprang out of Rae and Ivan’s years of touring together performing music and telling stories. Both are gifted musicians (this reviewer has fallen head over heels for Rae’s music in the last year or so) and writers. I first became familiar with Rae through their first book, First Spring Grass Fire. I was not familiar with Ivan untilGender Failure, which I now see is ridiculous on my part. Ivan is an accomplished author, having written over half a dozen previous books, one of which won the prestigious ReLit Award. I will be catching up with more of Ivan’s writing soon.

Rae and Ivan take turns writing the chapters in Gender Failure, telling tales of their successes and frustrations in living outside the gender binary. These stories are profound and poignant, at times heartbreaking and at times hilarious, and always deeply moving.

Even on the queer spectrum Rae’s and Ivan’s stories are unique. While both spent many years identifying as men, neither has ever elected to undergo hormore treatment. Rae talks about this decision at length – possessing a beautiful voice that most people would immediately assume was a woman’s, they didn’t want to jeopardize their art and career by taking testosterone. Rae grew up on the prairies of Alberta, and when they started playing guitar and writing songs as a teenager, what came out was country music. You can imagine the complicated situations this created in the typical environments in which country music thrives. A young man steps onto the stage in a small bar in a Canadian prairie town in a cowboy hat and boats, tunes his guitar, and begins singing with a lovely, gentle female voice. A trans country singer’s life and career is not a simple one. Over the years Rae moved on from country music into the indie and electronic spheres, and yet sadly they explain the reception and respect in these more cosmopolitan circles has not been all that different from the country world. Ivan has, of course, faced similar frustrations over the years.

Rae and Ivan display an honesty and transparency in telling the details of their experiences that they certainly don’t owe anyone, and it is with deep gratitude we should receive their stories. Gender Failure is an excellent book for anyone who is interested in equality and acceptance, and is particularly good for someone who is just beginning to learn about trans issues. Rae and Ivan are more patient and generous in their explanations than society has given them reason to be, and for that we should all be humble and gracious. This is a beautiful book, and I’m proud to have it on our library shelves. I’ll finish here with Rae’s words on the final page of the book:

“There is no retirement home for gender, but I like to think that the less I expect others to conform to the expectations of the binary and the more I refuse to participate in it, the closer my dream of true gender retirement is to reality.” – Rae Spoon, page 252