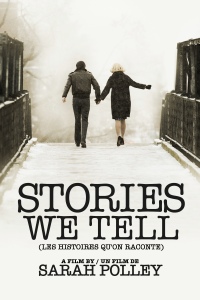 This week I finally had the chance to catch up with Sarah Polley’s moving documentary Stories We Tell, and it has edged vampires onto the back burner.

I’ve long had an affection for Sarah Polley and an interest in her work. As an actress, she carries herself with a peculiar grace that seems to separate her from her costars. I get the impression this grace is less about performance than personality. I watched Take This Waltz recently, her second feature as writer and director, and while parts of it were overly cute and some coincidences begged belief, the heart of the film showed an acute understanding of what loneliness in a marriage is like, what it means to want to be really seen by someone, and how even affectionate partnerships break down. Sarah’s parents divorced when she was young, and her output as an artist has explored issues of personal ontology. Nowhere is this quest more blatant than in Stories We Tell.

Stories We Tell obliquely poses a fascinating quandary: what if our ordinary lives were picked apart and explored with all the invasion and tribute afforded to the subjects of historical or celebrity biographies? What if my life was put on screen, and scenes and stories I have lived that are common (with variations) to much of humanity were played out for passive viewers? What if the questions I have asked myself in my mind while I lie in bed and the curiosities and turmoils that have played out in private conversations with my family members and close friends were edited and projected in widescreen format: would anyone care to watch? Would the result be interesting? And if the answer is yes, am I telling those stories? Am I paying enough attention to the stories of other “ordinary” people?

In Stories We Tell Polley interviews her siblings and other family members, as well as a number of family friends, to construct a picture of her childhood, her parents’ marriage and divorce, and the truths about her personal origins. There are certainly some unusual elements, but many of the facts and stories themselves are, as I said, unremarkable, in so far as they aren’t generally given this kind of treatment. The results however are far from unremarkable. As I watched the film I reflected on the role of the writer to make the human experience in all its glories, tragedies, and banalities stand out as worth regarding, and by extension worth living. There is no such thing as a boring story, just boring ways to tell it.

Polley seems to have had complete cooperation from her family members and friends, all of whom speak candidly. They were given no rules or boundaries on what they could say, and they were each interviewed separately to ensure even the imagined boundaries were as removed as possible. The overall tone is one of grace and the family members appear close, but their comments are not censored. Some individuals directly express to Polley, the (mostly) off-camera interviewer, their disagreement with how she is handling the project. A principal character tells her he doesn’t think it’s fair so many voices are being included and given equal voice when he has a much more intimate understanding of some of the events discussed. 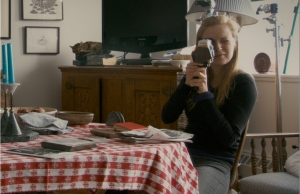 This complaint exposes Polley’s central theme of the documentary, beyond her pursuit of a cohesive personal history. The film is intended to explore how we tell stories, and how stories become histories. By allowing everyone involved the chance to share their versions of events without censorship or disagreement, even when they contradict each other or are clearly biased, Polley shows us the way our memories solidify or even change as we repeat them to ourselves and to others, the way conjectures become facts over time, how perspective alters perception, and how we excuse to ourselves our past actions and the actions that have been done to us. She shows us how we remember, and how we tell others what we remember.

The project wouldn’t have worked without the brutal, fearless honesty of the individuals involved, most especially Sarah herself. By allowing them to say what they need to about her, her parents, her conception, the family’s situation before and after her birth, her childhood, and anything else, she frees them to tell the stories they hold, unrestricted by the normal rules that govern these sensitive topics. It is this permission that makes the experiment work.

As I watched the film I couldn’t help but translate it to my own life. What would such a project look like for my own history? If a documentary reconstructed my childhood, and my sister and I were interviewed, and my mom and dad, and people we knew then, and people we know now, what would the result be? Could that candid honesty ever happen? Would I want it to? Would the result be too difficult for everyone involved to look at, to sit in the same room through, even if it proved fascinating to viewers who didn’t know us? Did Polley ask herself the same thing and find the answer to be Yes, but she went ahead anyway in the name of fearless artistic honesty?

Sarah Polley cared more about truth than comfort, and the grace with which she conducts her interviews makes her collaborators trust her enough to provide that truth. The result is a stunning rumination on the nature of memory, the process of storytelling, and how the two come together to create the stories we tell.

This essay was originally published in 2014 on the now defunct web journal The Samizdat.