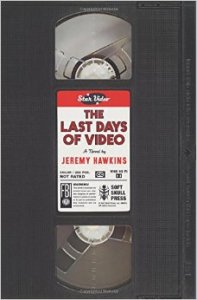 The Last Days of Video by Jeremy Hawkins (Soft Skull Press, 2015) is more than anything a love story. It’s a love story to movies, and more specifically, a love story to a certain breed of movie fanatic. That breed has lost part of its natural habitat, a very specific territory that served as a place for hunting its quarry and for periodic mating displays of arcane knowledge and unbalanced enthusiasm – the video store. I say all this affectionately. We cinephiles are an odd bunch, and Hawkins’s book understands us.

Video stores emerged in the mid-1980s with the advent of VHS home video. Before that time the only way to watch movies after they left the theater was to catch a revival showing at a local art theater or college campus or to scan television listings for upcoming broadcasts. If you had a hankering to watch a particular old film you just had to hope to get lucky with one of those options, or else spend silly amounts of money traveling to other markets where those films might be showing. Home video changed all that. It changed the way movies could be marketed after their initial theater run, and it changed the way an entire generation of potential movie lovers consumed their preferred art form. For countless cinephiles video stores served as a classroom, a library, a treasure trove, an easter egg hunt.

And then, just a short generation later, it all went away. The cultural window for video stores was mercilessly short compared to other purveyors of popular art that have struggled but found niches in which to survive. Bookstores have struggled with the advent of Amazon and e-readers, but independent shop owners have regrouped, re-strategized, and re-emerged in the last half decade. The numbers of independent bookstores is once again growing. Record shops are, at least in title, several generations of media format behind the times, and yet the charm of that very anachronism has helped them hang on, and vinyl record sales are growing faster than any other segment of the pop music market. Technology has not been nearly so kind to video stores though. It’s just too easy to download movies or have them sent to us in the mail. The selection is too good. Video stores have mostly died out, though there is a small resurgence among VHS collectors, a growing market for campy genre flicks that were only ever made available on that format, and for collectors of vintage VHS box art. Video stores are all but gone, and it’s a pity.

The Last Days of Video is a love song to the final bittersweet days of independent video stores, and to the patrons and employees who loved them. Set in a small college town in North Carolina, the book focuses on the owner and employees of a dying video store. The owner is Waring Wax, a cranky drunk who walked away from a successful New York job when his wife walked away with his boss. He’s owned Star Video for a decade, during most of which he has oscillated between mild and total intoxication, and for the majority of those years he has deferred primary managerial responsibilities to Alaura, a gorgeous and talented young woman entering her third decade. Her life is stuck. She’s been an honorary thirtysomething since her mid-twenties, and she and Waring have been somewhat codependent since she started working for him.

Waring is his own worst enemy. He drives away customers with his propensity for aggressive condescension. He pays no attention to his finances. He refuses to return calls to important business contacts. He doesn’t begin to acknowledge how pathetic his life has become and how dire his business situation until the town begins the process of exercising eminent domain to build an office park on the site of his precious but decrepit video store. He, Alaura, and their beleaguered colleagues spring into action, launching a far-fetched plan to save the store. Hijinks ensue.

I’m going to tell you all the things that aren’t very good about the book before I tell you why I really, really liked it. It’s only fair to do both, and I like bad news to precede good news. So.

The plot is convenient, contrived, and at times sitcom silly. Many of the players are more caricatures than characters. All the women but Alaura are written to be a little pathetic, and Alaura is uncomfortably close to manic-pixie-dream-girl territory. The ending, like much of the story, is charming but a bit escapist. If I said all these things about a book about anything else they would be damning. But.

This book is about something very specific. It’s about movies and the people who love them. The Last Days of Video is not playing for award season. It’s playing for the small group of fans who will see themselves in it, who will clap and whistle at the right scenes, who will pass it between themselves like a secret the multiplex mavens could never keep or understand. It’s a B movie, the kind of story that once filled the shelves of shops just like Star Video. It’s not about realism, it’s not making some grand altruistic point. If it were more realistic, more balanced, more patient, more high-minded or literary, it would be a disservice to the people it represents. The Last Days of Video basks in countless movie references, some explicit and some subliminal, and these references are something of a cypher for Hawkins’s fellow movie lovers to break a code of nostalgia and camaraderie. The book says, These people existed. We existed. And we still do, even if our stores are closed. Let’s watch a movie together. If you ever wandered the aisles of a video store in search of the perfect flick, if you ever debated friends over which awful, campy horror film to take home, if you learned something new about cinema from the contents of one of these shops, you owe it to yourself to check out this book.

Jeremy Hawkins, if you read this, know that I loved your book, despite its many problems. Those problems are there, but I enjoyed myself no less for them. It wouldn’t be right any other way, and I think they might actually have been intentional, another layer of homage to cinema, or cinema of a certain sort. You might not appreciate them, but I hope you appreciate the rest. It’s all true.

Let’s watch a movie together.