I’m going to be writing more in depth about Fritz Lang’s great noir Human Desire (1954) later on, but for now I want to focus on one visual/visceral aspect of the film that makes it stand out. The film is set around the railroad, and it loves its trains.

The great Glenn Ford plays a train engineer who has just returned to his job with the railroad after three years fighting in Korea. All of the principals (including possibly my favorite actress, Gloria Grahame, a woman I will be writing plenty more about in the future) are somehow involved with the railroad, and most of the film’s scenes take place on the tracks, in a freight yard, in the cab of a locomotive, in the seats or berths of passenger cars, in railroad offices, or in houses or apartments near the tracks. Train whistles and rumbling cars are often audible even when the tracks are out of sight.

Trains are a common enough sight in classic cinema, both because of the greater prominence of rail travel in the first half of the twentieth century and because of the romantic mystique trains hold in the American mind, but I would be hard-pressed to think of another film that so clearly loves its trains like Human Desire does.

The film opens with the camera mounted on the front of the train. The credits roll while we ride down the tracks. We jump throughout this nearly four minute sequence between riding the tracks and viewing the train against beautiful backdrops. 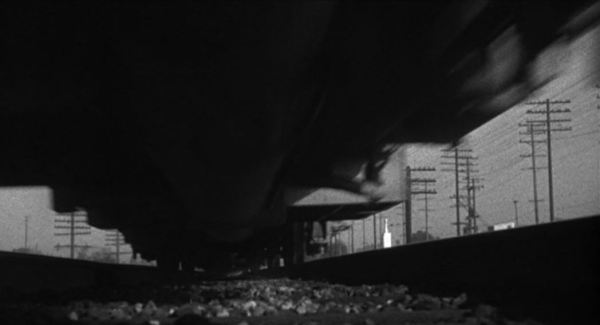 The peace of these scenes is occasionally interrupted by another train passing in the opposite direction, much as the earlier interactions between principals in the film are casual and light-hearted. 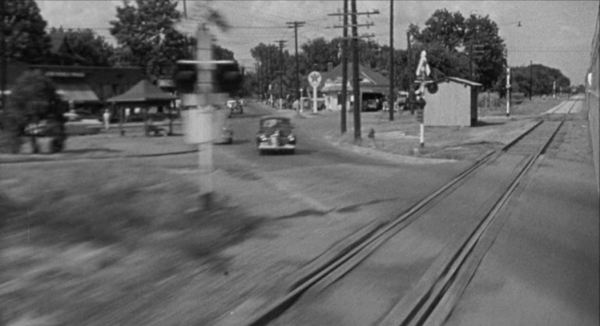 One of the interesting shots in this sequence involves a shot from the front of the train as it emerges from a bridge. The bridge holds a single track, but it splits into three tracks soon after. It could be a coincidence, but it’s easy to read into this the simple beginning of the story splitting into the complicated and deadly love triangle that emerges. Hitchcock famously used a similar visual technique with the train tracks at the beginning of Strangers on a Train three years earlier, a single track splitting into multiple lines criss-crossing and complicating the screen.

The track continues to twist and split as the train leaves its central course and weaves to its designated path.

Human Desire’s most tender moment comes when Glenn Ford and Gloria Grahame walk through the deserted freight yard at night and hide in a secluded corner by the tracks to talk. They’re vulnerable and gentle, and the scene has the feel of two teenagers sneaking away from parents, hiding some place they shouldn’t be. At one point they have to hide from the yard bull. Once the scheming begins, this scene is the most guileless of the secret rendezvous that pepper the plot, and it seems fitting it would take place where the heart of the film is located – on the rails.

I’ll have more to say about Human Desire later on, but I wanted to highlight this lovely theme throughout the movie. I love trains, and Fritz Lang’s quiet noir loves them too.