This is how to die in the arms of a suburban wind,
learning how to be forgotten
over and over again.
– from the poem Laurel Gene, page 69 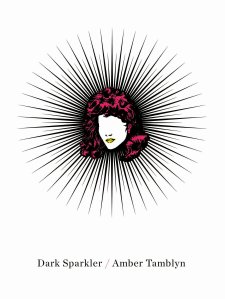 Amber Tamblyn’s newest volume of poetry Dark Sparkler is an exploration of the cannibalistic nature of fame, the morbid fascination with watching the entertainment media chew up and swallow whole the pretty young things that amuse us for a time on screens big and small. The book takes as its subject several dozen actresses who died young–from Peg Entwistle, who famously jumped to her death from the H of the Hollywoodland sign overlooking Hollywood, to Brittany Murphy, who died of a drug overdose just a few years ago. Tamblyn is an actress herself, having appeared in a variety of small roles over the years (she’s the teenage girl who dies horribly at the beginning of The Ring), and her reflections on the destructive aspects of a life of fame and the carnivorous tendencies of the industry that produces that fame bear the personal urgency of her stake in this world.

The book took over half a decade to produce, and in her extended epilogue (over a third of the total page count) she discusses the ways in which she struggled with her own mental and emotional problems while diving headfirst into these lives that ended too soon. Her husband told her early on, “Don’t get obsessed”, knowing full well she would. It is saddening enough for us to look at all these lives that burned out like meteors in the sky, but it is much closer to home for a young woman who has been through the process of auditioning, being told to lose weight, being fussed over like the frosting on a wedding cake, flirting with fame, nearly making it, not really making it, remaining largely anonymous, never fully succeeding as an actress, never fully failing as one. She knows the women she is writing about could be her. Could still be her.

I was his dark sparkler. A tarantula on fire.
An innocent with apple juice for eyes and a
brain full of famished birds.
– from the poem Laurel Gene, page 68

Tamblyn called in favors from a number of artist friends to illustrate the book, including actor Russ Tamblyn (her father), film director David Lynch, and rock musician Marilyn Manson. The book is visually arresting, saturated with color and splattered with art conveying the cheap brand of grief assigned to these deaths by a public who doesn’t know what else to do. The cover is in contention for my favorite of the year. The visual aesthetics of a book are often meaningless to its deeper themes, but for a project whose subjects were primarily valued (devalued?) for their looks, adorning these poems of such grim and tender morbidity in a plastic candy coating is apt.

Some of the verses in Dark Sparkler founder a bit in a directionless ramble, but even this can serve as a sort of commentary on the lives they riff on. There are times too when Tamblyn seems a bit too cheeky, as in an entirely blank poem titled simply Lindsay Lohan. Several poems are about fictional actresses, as with the above-quoted Laurel Gene, and provide for more free form reflections on celebrity.

Dark Sparkler isn’t perfect, but it is a fascinating and unique look at the nature of fame. Tamblyn presents her ambivalence toward fame itself, toward the individuals that can give it and take it away, and toward the women who bask in it for a time. There are no easy answers here, no trite warnings. These aren’t object lessons. They are women and girls who were famous and then died. Tamblyn has thoughts on that, and feelings. She shares them in Dark Sparkler. Take them as you will.