“My name is Mary Katherine Blackwood. I am eighteen years old, and I live with my sister Constance. I have often thought that with any luck at all I could have been born a werewolf, because the two middle fingers on both my hands are the same length, but I have had to be content with  what I had. I dislike washing myself, and dogs, and noise. I like my sister Constance, and Richard Plantagenet, and Amanita phalloides, the death-cup mushroom. Everyone else in my family is dead.”

So begins Shirley Jackson’s final novel, We Have Always Lived in the Castle. This is how it ends:

“‘Well,’ Constance said, ‘I am afraid of spiders.’
‘Jonas and I will see to it that no spider ever comes near you. Oh, Constance,’ I said, ‘we are so happy.’” 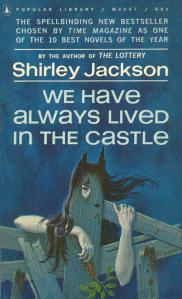 In between lie a hundred and sixty-some-odd pages of devastation and beauty. This slim novel does a few things no other book does nearly so well, and it’s an impossible volume to adequately define. It is a murder mystery in which there is little actual mystery. It is a haunted house story in which there are no ghosts. It has an unreliable narrator who never actually lies to us. It is a book centered around mental illness in which the characters with mental illness have the strongest voices, see the world most clearly. It is a book in which the broken show the most love, and defend that love with fire and venom.

The book tells the story of the Blackwoods, or what is left of them. Our narrator, Mary Katherine (whom the other characters call “Merrikat”), her older sister Constance, and their Uncle Julian live together in their family’s ancestral home in a sprawling estate in New England. Six years prior to the events of the book the entire family–the girls’ parents and brother and Julian’s wife–were killed after someone put arsenic in the sugar being served with the blackberries at dinner. Constance didn’t put sugar on her blackberries, and Merrikat had been sent to her room in punishment for some unspecified infraction prior to the meal, so neither was poisoned. Julian only survived because he used very little sugar. Constance was tried for the murder but was acquitted for lack of evidence. We intuit very early how the arsenic got into the family sugar bowl. This is delicately and deliciously confirmed in a perfect scene three-quarters of the way through the book.

The house is near a village, and the villagers misunderstand and mistreat the survivors living in agoraphobic exile in the Blackwood house. The villagers believe the Blackwoods think they are superior to them, and they’re right about that. The tragedy that befell the family and the antisocial eccentricities that have multiplied in the wake of the event have separated them so totally from the village community the two entities live in mutual antagonistic fear of each other. Says Merrikat near the beginning of the book in the only portion that takes place off the family’s property:

“I always thought about rot when I came toward the row of stores; I thought about burning black painful rot that ate away from inside, hurting dreadfully. I wished it on the village.”

The townspeople are cruel, and their cruelty becomes the catalyst for the book’s climax. Underneath this cruelty, they are also scared, simple, and, near book’s end, impotently and incompletely contrite. Jackson doesn’t allow these mitigating factors to excuse them; we hate them with Merrikat and Constance, even if we can kind of understand. None of it really matters. The Blackwoods are doomed to isolation, and they decide to decorate that isolation as best they can.

We Have Always Lived in the Castle was Jackson’s final book, written near the end of her life when her own agoraphobia and paranoia had her locked inside her residence in Vermont. The book layers atmospheric dread with a deep look at the tender and violent psyches of two wounded young women. It’s a phenomenal achievement.

What is the book really about if it can’t be described by the genre descriptors given earlier? It is, I suppose, about a family who never knew how to handle a difficult but naturally occurring thing in their midst, and how that natural thing became toxic and was slipped into the sweetest thing at their domestic table. It is about how broken people love each other, and how that love can be scary to people on the outside, and sometimes scary to the people on the inside. It’s about how badly people want the traumas of others to be safely tucked away, and how those traumas refuse to comply. It is about a lot of other things you’ll discover if you read it. I’d like to hear what it’s about for you.