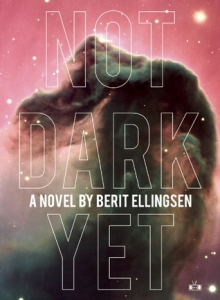 I love Two Dollar Radio, the indie press from my home state of Ohio that just released Berit Ellingsen’s Not Dark Yet. I really wish I loved Not Dark Yet, but it provided my first disappointment from this fantastic press.

I wasn’t bored during Not Dark Yet. Ellingsen’s straight-forward, no frills prose was engaging and her extensive descriptions kept me anchored in the book’s environments throughout. The language, description, and characters in the book reflect the mind of a talented writer. Unfortunately the narrative feels uneven, unlikely, and frustrating.

Not Dark Yet is about Brandon Minamoto, a young man whose name we are given in the first sentence and never again. Names, it turns out, are a serious problem in the book. In an effort to (I can only assume) make the book’s appeal universal, no place is ever named: no city, state, business, school, or even continent. This would be workable for a short story, but for a novel the convention becomes constraining. It’s a pretty basic tenet of fiction writing that you achieve universality through specificity; doing exactly what Ellingsen does here with refusing to give place names actually makes the story less relatable. We have no clue where we are, and it becomes much easier to detach from the events of the novel. It’s pretty difficult to avoid naming anything in something the length of a novel, and the effort strains the prose here at points in a way that calls far too much attention to itself. This entire convention should have been scrapped early in the editing process.

Brandon is a veteran of the military (of an unnamed country, having fought in another unnamed country) dealing with the regret of having taken human lives. He is a photographer now, and is hired at a university to assist profs and researchers. An assistant professor engages him to take photographs of an experiment he is doing on the hearing abilities of owls. He assists him for a few weeks and begins a sexual affair with the professor, but when an owl attacks the professor and Brandon must kill it to rescue him, their relationship ends. The episode brings back his regrets over his violent past, and he decides to buy a cabin in a remote mountainous region, leaving his boyfriend and family behind in the city. He also applies online to an astronaut training program for a private business that is planning to send a manned mission to Mars.

Not a lot happens. Some local farmers lease the land around his cabin to experiment with growing crops, something that would have been impossible before global warming (the book takes place an unspecified but not too distant period in the future). This effort is wiped out when a natural disaster destroys the crops, and the farmers just…leave…because apparently this is a future in which basic crop and property insurance is no longer available. Brandon advances in the astronaut selection process. He experiences strange “white outs” in which his body and mind appear to channel the cosmos, but these dissipate as the novel moves on and they never seem to impact the story itself in any way whatsoever. They are frail echoes of the cosmic/human duality at work in another Two Dollar Radio title from 2015, Sarah Gerard’s Binary Star.  He is secretly recruited for an undeveloped ecoterrorism plot that seems as far-fetched for Brandon’s character as it does for his recruiter. There are also physical details in the novel that make little sense: the descriptions of how Brandon starts fires in his cabin seem to reflect how a person who has never started a fire would describe starting a fire, and I was left scratching my head the numerous times Brandon hikes an hour and a half to the nearest town and returns, again on foot, carrying heavy objects like a large bag of sand, an exercise treadmill, or enough firewood to supply his cabin for a while.

There are emotional details of the story that feel vague and unformed. The regret Brandon feels about his military past and the death of the research animal are inferred and we must for the most part assume they play certain roles in his life, but they are never really spelled out. One gathers we are supposed to find deep meaning in his white outs in which he collapses and imagines a nebula, but they never tie in with the rest of his interior or exterior life in any way, except as an inconvenience.

I wanted to love this book. I like what Ellingsen had in mind; there’s a good story a couple revisions away from being revealed here, and her prose is at points lovely, as here when Brandon images Mars:

“Endless plains traced with the marks of long-forgotten rivers and deltas, superimposed by craters and calderas. An anaerobic, freezing wind blowing red. Going there, seeing those sights, landscapes that no human being had ever witnessed before, would be more than worth the danger, boredom, and loneliness of the journey.” – page 96

Ultimately though, the book doesn’t come off. Or it didn’t for me. The book is emotionally disjointed and lacks direction. Frustratingly, many of its issues could have been cleaned up in the editing process and weren’t. I’ll look for better from Two Dollar Radio in the future.