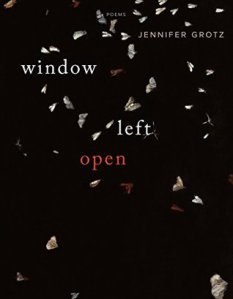 In her new collection Window Left Open Jennifer Grotz explores the relationship between experience and expression. A poet lives a thing, and then that poet seeks to write about that lived thing. Why? Where does that impulse come from, and what does it mean? Which is primary, experience or expression, and does either impinge upon the other? What dwells in the interstitial space between what we live and what we write about what we live? Grotz turns an interrogator’s lamp onto her own creative urge and asks it what it thinks it’s doing, and she seeks to separate with a deft blade the epidermal layer that faces the world from the subcutaneous consciousness that lies below.

She doesn’t undertake this effort straight on, however. Most of the poems in Window take nature and our stillness in its presence as their subject, and it is only in a line here or a couplet there she brings up her driving question. It’s almost as if she has to remind herself of the task she’s set out for herself. She is distracted by beauty, and she writes about that beauty, and it is this very linear flow, this automatic call and response, that incites the question she could easily forget: why does this sequence occur? There seems to lie a deeper question far below this one, a question whispered and barely acknowledged, one that asks if it is wise to ask at all, if it is better to create without questioning why or to investigate one’s own creative drive and risk its damage. Perhaps this is why she asks her questions only glancingly.

she wants something she has no language for.
She doesn’t want the language. She wants the something.
– from “Edinburgh Meditation,” page 25

Grotz’s glimpses of nature are unique in their exceeding stillness, the meditative patience with which she examines these slim slices of the world. These don’t feel like the striding natural poems we often think of in which the poet places himself squarely into the action of the natural world around him. They feel instead like the lyrical equivalent of a still life painting, or like a scene glimpsed through an open window, as the title suggests, the poet a space removed from what she describes. She picks up one small scene in her hand, and she writes down what she sees. She’s in no real hurry about it, but this slow pace does not lead to loquaciousness, a mess of description that muddies up the water. There is an economy of language here that gives every word a weight, even if that is only the weight of a snowflake or a blade of grass.

What am I to make of him?
The whole rest of the world is still waiting to be encountered.
But wherever I go in this poem, there’s a peacock.
– from “A Poem about a Peacock,” page 41

Informing this meditative tone is the setting for many of these poems: Grotz spent time at a monastery in the French Alps, and many of the poems here are set in its weathered walls and quiet grounds. The intentional contemplation and silence of this setting also imbue these poems with a sense of the transcendent, and God is invoked more than once, as are the actions of devotion.

The lashes clutched it close, melting it against the eye’s hot surface.

And like the woman talking to herself in an empty church
eventually realizes she is praying, I walked home with eyes that melted snow.
– “Snowflakes”, page 11

I don’t think Grotz arrives at the answers to her central questions in Window Left Open, and I don’t think that’s the point. The asking of them is sufficient, and one assumes she will dance with these questions as long as she puts pen to paper in response to her lived experience, in response to the way snow and scorpions knock her silly with their absurd and fearful beauty. Near the end of the book, we come across the title poem in which Grotz breathlessly witnesses the still night air inside and outside her window at the monastery, and she concludes with these lines that are as good as any at summarizing the spirit of this collection:

That’s what I ask for next, God,
that’s why I’ll let myself sleep:
translate me.
– page 45

This book is not a religious work, though it is certainly one by a poet unafraid to acknowledge her place before the cosmic mystery. It reads harmoniously in concert with spiritual contemplation, and any pilgrim could find recognition in its pages. In “Edinburgh Meditation” Grotz views a classic painting of a small boy, and she imagines the life of his sister, how she must have wandered the moors just as he did, though she will not be remembered. These lines in the middle of the poem describe well the way Grotz’s words fall atop each other like snow, accumulating to a depth no single flake would seem to hint at:

Her steps, thousands
of them, start to feel like thinking’s accrual
into knowledge.
– page 23

Window Left Open is a slim and deceptively elaborate collection, one that lingers in the heart and mind of the reader.