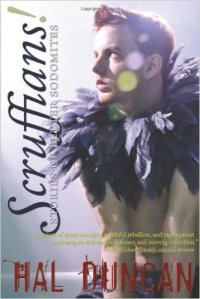 Hal Duncan’s Scruffians: Stories of Better Sodomites is a collection of fantastical stories that are at points silly, grotesque, absurd, transgressive, poignant, and usually more than one of those things at a time. What all of them are is fun.

The collection begins with two stories about the titular Scruffians, a motley assemblage of street kids who form a gang, a tribe, a family. As they describe themselves in an oft-repeated chant, “orphans, foundlings, latchkey kids, urchins, changelings, live-by-wits, rascals, scallywags, ruffians, scamps, scoundrels, hellions, scruffians STAMP!” The stamp of reference is a mystical device in the world of the story by which individuals are permanently fixed at their age and disposition at the time of the procedure. To some this was done by a shadowy Institution, but at some point the scruffians stole the stamp and began using it themselves to induct new members. Once stamped, an individual never ages and can never be killed or permanently injured. They are back alley Lost Boys, and their individuals stamps tell their stories, stories they have invented for themselves.

In “The Behold of the Eye,” a faery lives inside the eponymous land of a child’s imagination, an imagination outfitted and populated by the things that child can see. The faery begins when the child is a baby, and the story moves through the late teen years. It becomes clear the faery’s host is gay, and struggling with the torments of self-hatred and school bullies. His “Behold” becomes a nightmare land of raining corpses and hideous monsters. It takes a tragedy to break through these horrors and set everything on the path to peace once again. The story is a like a queer horror version of Inside Out, and is wonderfully realized.

There is a delightful twist on the story of Peter Pan and Captain Hook, and another story about pirates that makes the pirate world as–let’s be honest–gloriously and flamboyantly gay as it’s always subliminally been. As one of these privateers declares as he draws his pistols, “Damn right I am! I’m Flash Jack Carter, the Darling of the Deep, the Blessed of the Briny, Sodomite  Scourge of the Seven Seas…”

In “The Angel of Gamblers,” some friends sit around a table playing poker and passing a joint, while one of their company tells a fantastic tale of gambling his soul against a being he thought was the devil but turns out to be something far more bizarre. The story intermixes this character’s tale with the tension of the poker hand being played, in a way that ratchets up the suspense of both to a fitting conclusion, one as unlikely but satisfying as the game at the end of Cincinnati Kid.

In “The Origin of the Fiend,” we get a poignant(and possibly autobiographical?) story about a young gay man whose childhood escape was in superhero comic books. The story is touching, and for much of its length gives us a plausible and heartbreaking look at a child who needed these masked heroes to feel whole, to survive, to breathe. Toward the end, however, the story it flipped on its head in a twist we didn’t see coming.

There are clever lines throughout these stories, pieces of brash wit that made me laugh out loud. In “Jack Scallywag,” a Quixotic story of a young orphan who sets out to become a knight, the title character challenges a regal knight to a jousting duel. The knight laughs him off until Jack mouths off in return, provoking him: “You’re a serf, he says. You’re a twat, says Jack.” A number of these stories also include Biblical imagery that seems to indicate an intimate familiarity–and fascination–on Duncan’s part with the stories of the Bible. Having grown up in Christianity myself, I would be very interested to find out more about this from him.

Perhaps the most entertaining story of the bunch is “Sic Him Hellhound! Kill! Kill!” In this we are inside the head of a werewolf who, with his human handler, must hunt down a murderous vampire. It doesn’t take long at all to realize we are reading a wicked send-up of Stephenie Meyer’s Twilight books. Anyone who lived through the years of those books’ popularity will take great pleasure in this demolition of the characters of Edward and Bella that spares nothing in tearing this bloated story apart. I smirked all the way through it (full disclosure: I read the Twilight books years ago–all four of them–and they are as bad as you think).

Scruffians is a ton of fun, and displays a tremendous strength of imagination and world-creation on the part of Duncan. This is the first book of his I’ve read, but it won’t be the last I read from this author.

Note: I received a free review copy of Scruffians from Lethe Press in exchange for an honest review.

One thought on “A Review of Scruffians: Stories of Better Sodomites by Hal Duncan”