While classic comedy films had to tick a few important boxes in order to be considered screwballs, the movies that qualified were far from formulaic. There were only a few real requirements: fast, witty dialogue, a zany and unlikely plot, and a willingness to toy around with gender roles and the moral expectations related to them. 1959’s Some Like It Hot is worlds apart from older screwballs like The Lady Eve or His Girl Friday in many ways, but if we look just a layer beneath the surface, we’ll see it’s playing a similar game.

The film Tony Curtis and Jack Lemmon as jazz musicians in Chicago in 1929. They lose their jobs when the speakeasy they play for gets busted, and they lose the last of their savings when Joe (Curtis) bets it all on a bad tip at the dog races. This is far from the worst of their problems, however. They are unlucky enough to be in the wrong parking garage at the wrong time and witness the St. Valentine’s Day Massacre, in which “Spats” Colombo (George Raft) and his gang knock off seven other mobsters. Joe and Jerry (Lemmon) are able to get away, but the mobsters know their faces and occupations, and the musicians need to get out of Chicago fast. They hear about a jazz ensemble heading to Florida to play a hotel for three weeks, and the band needs some more musicians. The only problem? It’s a all-female band. This proves to be only a minor obstacle as “Josephine” (Curtis) and “Daphne” (Lemmon) show up on time for the train that evening, adjusting some padding, struggling to walk in heels, and complaining about their drafty skirts.

Their disguises are only threatened when both “girls” find themselves enamored by Sugar Kane (Marilyn Monroe), the band’s singer. Both try to gain the intimacy of the voluptuous songstress without giving away their true identities. Once the group reaches the Florida beachfront hotel, the hijinks of the band’s newest members really amp up. Joe begins impersonating a wealthy oil heir to try to seduce Sugar during the hours he’s not being Josephine. Daphne, meanwhile, is trying to sabotage this budding romance while also trying to fend off the lecherous advances of actual millionaire Osgood Fielding III (Joe E. Brown). Things are going surprisingly well until Spats and the Chicago gang happen to end up at the very same hotel for a meeting of the “Friends of Italian Opera,” a cover for a mobster’s summit (like I said, the plots of these films were far-fetched). When the “girls” are recognized, they have to get out of the hotel alive.

The cross-dressing provides ample opportunity for playing with gender expectations, as well as for some subversively clever commentary on gender and sexuality. Joe/Josephine and Jerry/Daphne are none too pleased to discover how much unwanted male attention they receive in their new outfits from men “with eight hands, who are only after one thing,” but ironically, that doesn’t change the way they treat the women around them when they aren’t in drag. They’re as objectifying and manipulative as the very men whose objectification and manipulation they complain about when they’re in their dresses and wigs. The film utilizes plenty of sexual innuendo, which might seem tame by today’s standards, but would have been quite racy in 1959, during the last gasps of the Hays Code. The movie is also able to hint at the idea of same-sex attraction and intimacy, though it must do so in a roundabout way. The idea of two men or two women being together is played as a joke, an obvious impossibility, but the visual gags say otherwise, and the very mention of the idea offers a subversive reading. The film flaunted moral codes and the Hays office, and earned the condemnation of the Catholic Legion of Decency. 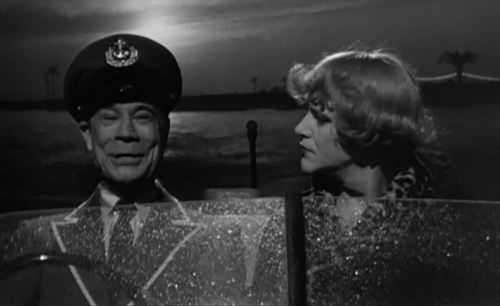 Some Like It Hot is an indisputable American film classic–hilarious, deceptively intelligent, and well-acted. And the film’s closing line is one of the best in cinema.

I hope you’ll come watch this comedy gem with us on Thursday, August 11, as we close out our Screwball Summer. As always, GPL will provide free theater popcorn, candy, Jones Soda, and coffee, and I will lead a brief discussion of the film after the screening. We hope to see you there.