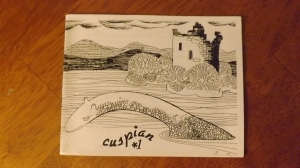 Cuspian is a 2015 zine by Jami Sailor, young woman who had recently moved to Cincinnati from Chicago, though she is originally from Detroit. The zine chronicles her adjustment to the new city, and explores issues of identity and belonging. It can be disorienting to arrive in a new place you’re unfamiliar with, and find social structures and customs and coded languages in place that you’re not a part of.

We moved a lot when I was a kid, and my sister and I rarely had time to establish friendships or feel like we really belonged anywhere. The feeling of disruption Jami expresses is one I’m familiar with. Beyond that, there is the feeling of not actually being from anywhere that anyone knows about. I was born in a small town, lived in a trailer park, and moved from small town to small town till just before adolescence, when we settled in the small town I live in now. When you’re from a small town, you don’t share any sort of group identity with the people from that town like you do in a city. There is no broader cultural significance to that town like there is to Chicago or Detroit or New York City or any other large city. You don’t hear your town mentioned in the news or in movies or songs or books. It begins to feel like you, yourself, are from nowhere.

Jami doesn’t explore that second experience directly in Cuspian, but her reflections on displacement and feeling lonely and like a fish out of water made me reflect on these feelings in my own life.

Cuspian is a short zine, with charming artwork. Pick up a copy if you have the chance. I got mine at Quimby’s in Chicago.

One thought on “A review of the zine Cuspian, Issue #1”