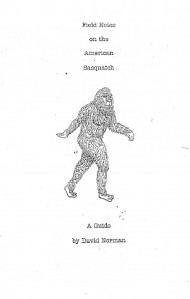 Field Notes on the American Sasquatch: A Guide by David Norman is a highly entertaining cryptozoology zine with a unique conceit. In the zine’s introduction, the zinester (name not given) tells a story about his weird uncle, David Norman, the black sheep of the family, who disappeared many years ago after wandering into the woods. The zinester was digging in his mom’s attic recently, and found a pamphlet his uncle had written, laying out his beliefs and findings about the American sasquatch, or bigfoot. The main body of the zine is this supposed pamphlet. It’s possible the zinester had a weird uncle for wrote about the sasquatch (we should all be so lucky), but more than likely this is a gambit to write an amusing and outlandish zine about this famed cryptid. Either way, the zine is a lot of fun.

David Norman not only believed in sasquatches (which he abbreviates throughout at “Ssq”), but believed they are elevated beings. Not supernatural, but more evolved than humans, more in tune with nature, more peaceful, more aware. He believes they were the Nephilim discussed in Genesis 6, and he insinuated Jesus himself may have been half-sasquatch, because his Ssq father might have used his telepathic abilities to make Mary forget she’d had sex with him, thereby leading to the virgin birth story. Sasquatch sex, he explains, is unusually passionate, intimate, and free of shame or rejection.

Norman spent much of his life searching for Ssq, and even made a special suit of animal skins to try to look more like one. He claims they can detect technology, so any attempt to track or record them with such devices will end in failure. Instead, you have to get close to the land, live as an animal, and hope to get lucky. He spends a good deal of time refuting popular arguments against the existence of Ssq, and gives reasons why he thinks so few people have seen them.

Field Notes on the American Sasquatch is a lot of fun. It’s absurd, but highly entertaining. If you find a copy at your local zine shop, check it out. It’s worth it.