I was nine years old when the animated version of Disney’s Beauty and the Beast came out, but I was probably ten when it came to VHS and I finally got to see it. I had seen The Little Mermaid in the theater two years earlier, and while I’d loved it, I was too young to understand it marked the beginning of Disney’s new era of animated features. It’s possible Disney didn’t realize it either until that movie proved so successful. When I finally saw Beauty and the Beast though, I knew something new was happening. I had never seen an animated film like it, something that seemed so visually stunning and polished. The Little Mermaid had been something of a scrimmage, and Beauty and the Beast was the real thing, showing the world Disney was back in a big way.

Of course, I was way too young and way too Evangelical to understand the problematic elements of the story, which have been extensively addressed by individuals more capable than I. When I saw Disney would be releasing a live action version this year, and that it would be starring our beloved Emma Watson (we’re big Hermione Granger fans in this household), I knew we would have to go see it, and I wondered how and if to address those problematic elements with my daughter.

We loved the movie. I’m really glad they decided to maintain the original score. Beyond the title song and the song in which Gaston brags about his hunting prowess, I had forgotten most of the tunes, but they came back to me quickly. Emma Watson was radiant; she is Belle, and she’s perfect for the role. I could have watched her waltz around in awesome outfits all day. I enjoyed the set design for the castle and the grounds. I like that Gaston (Luke Evans) was a bit toned down initially from the comical baffoon of the animated version, and Josh Gad as Le Fou was a lot of fun. It was just…a lot of fun. Exactly what I wanted it to be. 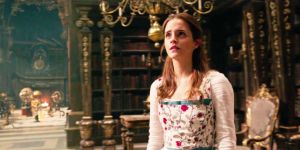 Much fuss has been made about the interracial couple (actually there were several) and Le Fou being gay. These were nice elements, but not taken very far. Baby steps, I suppose. The overall racial diversity was nice to see. I guess it’ll be a while before we get the version where Belle’s dad is the one who has to fall in love with the Beast to break the curse.

As soon as we got home, we put on the soundtrack to the original and sang along to the parts we remembered. I assume this will be repeated many times in the coming weeks until we have them mostly memorized.

I didn’t talk with my daughter immediately about the problematic elements of the story. The Stockholm syndrome stuff, the anger and abuse stuff, etc. I’ll do that this week some time.

Have you seen the movie yet? What did you think?

2 thoughts on “Beauty and the Beast”