I’ve been a bit obsessed with Lupe Vélez lately. Obsessed with her ferocity, her talent, her energy, her beauty, her unwillingness to hide on screen, her tragedy, her flaws, her wonder. Criminally, she has been largely forgotten. She was mostly typecast during her brief career, playing “exotic” beauties of any non-white race the film called for, and was known by a number of now mostly offensive nicknames: Mexican Spitfire, Mexican Hurricane, Mexican Wildcat, Mexican Madcap, Whoopee Lupe, Hot Tamale, Mexican Kitten, Tabasco, and others.

She packed and exuded so much power in her slight, five-foot frame, a bundle of nerves and steel and gunpowder. It’s easy to see how the typecasting happened, how the stereotyping dug so much deeper with Lupe than with some of the other classic Mexican actresses; she was, in a lot of ways, the embodiment of the inaccurate and racist image white audiences had (and sometimes still have) of Latin women: fiery, temperamental, sensual. Except it appears to have been more than a role she was playing. That was kind of who Lupe was. The stories, veiled in the fog of apocrypha and legend, are as amusing as they are worrisome, as intriguing as they are lurid. Did Lupe really stab Gary Cooper with a knife during a domestic dispute? Did she really fire a gun at him while he tried to board a train? Was she as much of an exhibitionist at parties as rumor holds? Whose baby was she pregnant with when she committed suicide at the age of 36 in 1944?

We can be more or less certain about one thing: the popular and horrific story of her death is almost definitely not true. Beginning with Kenneth Anger’s exploitative book Hollywood Babylon, the story began to proliferate that Lupe stumbled to the bathroom to vomit after ingesting a large volume of Seconal, and then drowned in the toilet. The story went on to be immortalized as an anecdote in the pilot episode of Frasier. None of this happened, except the Seconal. She was found peacefully on her bed.

It’s a shame we have to cover those details at all, rather than focusing on another thing we know for sure: she was a dynamic actress, a powerhouse presence on screen. Lupe Vélez was intoxicating in almost any role, even the silly and inadequate ones, of which there were plenty.  It’s impossible to look away from her. She radiated so much life. That she was so often typecast and limited, and that she was gone so young when her life ended, is a tragedy. 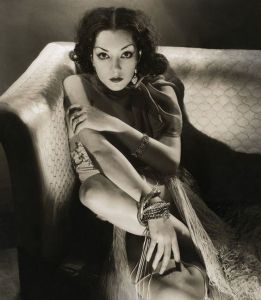 I’m thirty five years old, one year younger than Lupe was when she swallowed a handful of pills. Life can get us. Sometimes it runs us down and jumps on our backs and we can’t take another step. I’ve had my share of dark nights, of hours when there just didn’t seem to be much point in any of this. One of those nights–or too many of them, more likely–snatched Lupe Vélez from us. She’d been objectified, stereotyped, vilified, relegated. At 36, she was pregnant with a baby from a man who wasn’t man enough to help her face the inevitable shaming that would come from a hypocritical public. It was too much for her, and we lost one of the most electrifying performers of classic Hollywood. We lost a young woman who’d fought against a lot to get where she was, who’d refused to behave the way she was told, who’d refused to apologize for her emotions, her opinions, her identity.

Lupe Vélez died 38 years before I was born, but, as weird as it sounds, I miss her. I’m a little obsessed with Lupe right now. I’m not sure when that will change.