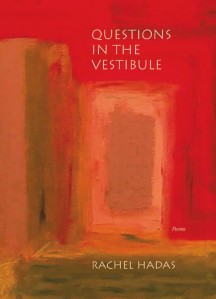 As you might be able to deduce from the title of Rachel Hadas’s 2016 poetry collection, Questions in the Vestibule is about the transitions, the in-between spaces, being stuck in the middle. As she begins the book in the appropriately titled “Threshold,”

The in-between is queasy,
but all is in between.

She finishes the poem with All is vestibule.

The book is split into three sections, and is informed throughout by the recent death of Hadas’s husband, the father to her children. In the book’s first section, the grief is fresh, and Hadas is lost in the unanchored fog of fresh sorrow. She is disoriented, which as a sensation is itself a transition. These images of thresholds and “vestibules” are peppered throughout the collection, both announced and unannounced. A beach, a ship, dawn, a hospital, birth, Indian summer…all of these represents transitional states, doorways from one stage or place to another, things or ideas that divide life into before and after. She addresses grief here as a liminal state, an in-between in which you never feel at home or at rest. Grief is a passage.

In one particularly poignant vignette (“Six Summer Days and Nights”), Hadas recounts handing out her husband’s flannel nightshirts to her son, his girlfriend, and another friend like a cult uniform, all of them sharing a moment of reflection in this odd garb. In 2011, my uncle’s on my dad’s side died of cancer. He was one of the strangest, gentlest men I’ve ever known, and he was never without a flannel shirt or jacket. After he died, there weren’t many possessions to divide up as mementos, but everyone in my family did each claim one of the flannel shirts, and the day after his funeral, we all put one on and took a picture. He was tall and large, and all of us–my dad included–look like children wearing their parents’ clothes. This poem instantly snapped me back to that moment six years ago.

If this first section of transition is Autumnal, the second section is Vernal; Spring is still a transitional state, but one moving toward life and growth. Autumn is about a limiting, a trimming back. In Spring, new limbs are grown. Hadas is farther through her grief process here, though it will never truly be completed. In “Afternoon in Between,” the first poem of the section, she writes to her departed partner Let’s move through the in-between together. A few pages later, she reports The veil between the worlds is growing thin. The pain is still there, but she is no longer lost. She is relearning what home feels like.

To continue with the seasonal analogy, the book’s third and final section is a wild oscillation between summer and winter imagery. The poet is finally at home again, comfortable with the new companion of grief. In some poems she is frigid with the cold of loss, at other nearly manic with the giddiness of life. The poems here were hit or miss to my taste, less focused, but there were moments of brilliance. In “But It’s True,” she writes,

My glass cannot persuade me I am old.
What I do is this; for this I came.
Three flags flap: joy, grief, change.
Salute them patriotically. True:
My soul waves like a flag when I see you.

The sun with its dumb-fuck optimism has risen again.
Lank grass, naked, shining after winter
When beauty lived and died as flowers do now.
A well of longing opened up, and through
Its star-reflected waters I saw you.

What more can you ask of a poet than lines and stanzas like that?