I didn’t sleep real well last night, like I don’t most nights. It’s been this way since early childhood, and I used to just assume everyone laid awake for hours every night. It wasn’t till adulthood I discovered I had any sort of sleeping problem.

Being well-accustomed to pulling myself out of bed exhausted in the mornings, I am something of a connoisseur of the films and music best suited to these hazy hours. I have a playlist composed of these songs. It’s mostly shoegaze and dream pop, some Gliss, “Fake Empire” by The National, the sadder new wave bands, some other stuff. 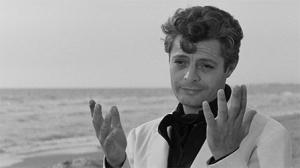 When I was in my twenties I didn’t get sleepy until after midnight, and if I was tired the next morning it was a warm and delicate glory, like good shoegaze music or the ending of La Dolce Vita, which I fully understand was not a redemptive conclusion, Marcello Mastroianni’s character standing on the beach like the crying boys at the end of Lord of the Flies when they’re jolted awake from the terrifying sincerity of the silliness they’ve lived. It’s possibly just dawning on the Italian journalist he too should be crying, should be waking up, but he doesn’t. He turns and walks back to the absurdity. Mornings after late nights used to feel that way, like there was nothing to regret in burning the candle from both ends. It gives a lovely light, after all, the early morning when your head is still smoky and your skin tingles. My body gets irritable now on those mornings. I’d like the body of my twenties back, with the circumstances of my thirties.

L’avventura is a mood; it is a color, colors, though the film is black and white. The entire thing, similar to Fellini’s La Dolce Vita, connotes the smoky, drowsy reverb of dawn when you’ve been awake all night. The characters in the film live perpetually in that haze, never really awake to their own lives. They move from one diversion to another, optimistically injecting each minor experience as a stimulant but only ever succeeding at further anesthetizing themselves. A woman disappears. Her best friend watches the sunrise, and also has an affair with her still-missing friend’s boyfriend. The movie stops caring about the missing girl, and focuses on what remains; namely, Monica Vitti’s face. Her face always remains. It is haunted, vacant, impossibly lovely, sharp, bored, apathetic, seductive, more hopeful than she dare let on even to herself. The final scene, after her boyfriend who was her missing friend’s boyfriend yesterday has slept with another woman, is one of the most perfectly balanced ambiguities in cinema, as I remember it. He is weeping for what he has done and what he fears he has lost, and his head is in his hands. Vitti’s character is behind him. She reaches out a hand, pauses, then places it on his shoulder. And I have no idea what it means, though I have spent so many hours since that original viewing thinking about it. 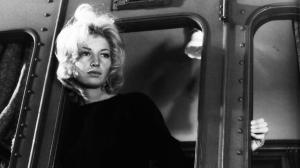 Is it forgiveness? Is that touch an act of conscious redemption, a laying on of hands, an absolution for his sins; an absolution, now that she’s been shocked awake by a personal hurt, for her own sins, for the fact she, not her missing friend, is even in the position to grant it in the first place?

Or is it concession? Is it a further sedation, a turning away from this possible awakening and from all possible awakenings and accepting this is the pattern of a life so lived, there is nothing more and nothing better, nothing else deserved, a surrender to numbness.

Is that simple hand on his shaking shoulder an act of life or an act of living death? Is it the first conscious decision her soul has made in many years, her self relearning to walk, or is it acquiescence to the life-long coma her soul has been slipping toward for years. Is she becoming a child or becoming her parents, parents whose money has given her great privilege and nothing else? I don’t know, and I don’t want to. 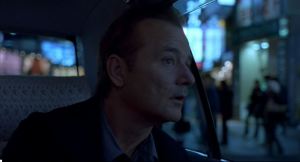 This is off the point. The point is L’Avventura, like La Dolce Vita, is a quintessential sleep-deprived viewing experience with which to greet a new day. It’s strange how suited the Italian new wavers were to this feeling, but several Fellini films and almost everything by Antonioni fits the bill. Sofia Coppola, an Italian transplant one generation removed, makes some of the most perfect drowsy morning movies there are. Hell, Lost in Translation is practically an ode to this experience. Scarlett Johansson and Bill Murray meet because neither of them can sleep, and the movie is a love poem to the experience of being so tired you’re delirious, to the cotton candy beauty of fuzzy guitars and pre-dawn light, to the secret you feel like you’re carrying when everyone else has spent the night in dreamland and you’ve stayed awake through the dark hours. Marie Antoinette, a criminally misunderstood and underappreciated film, even has a scene in that blue, pre-dawn light, when revelers greet the new day still drunk on youth and alcohol and sex and their own wonder.

I certainly wish I slept more, but I don’t entirely want to give up those moments either.