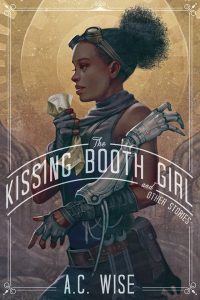 The characters of A.C. Wise‘s stories in The Kissing Booth Girl (Lethe Press, 2016) are outsiders, every one of them. Some have secrets and hide in plain sight, others have secrets and couldn’t hide if they tried. Some are black or brown, most are women, many are queer. Some are not human, not in the strictest sense. But more than anything else, a deep humanity is what defines this collection, an inner vulnerability that remains soft to the wounds the world inflicts, and is stronger because of it.

In the title story, Beni is a young black woman who works for an all-mechanical, steam-powered circus. She is despised by the show’s manager, and harbors dreams of running off to an academy where her mechanical aptitude can be appreciated and honed. She draws plans for an automaton, and hopes if she can present a piece of it to The Kissing Booth Girl, a strange, glowing being who can grant wishes but requests much in return, she might be able to achieve her dream.

In “And If the Body Were Not the Soul,” a woman unable to touch others without fear or revulsion makes a connection with an alien being for whom touch is a window to the soul. In “After Midnight—A Fairy Tale Noir,” the story of Cinderella is turned on its head as a hardboiled noir, and the tone isn’t the only thing that’s taken a turn for the dark. In “The Pornographer’s Assistant” and “The Last Survivor of the Great Sexbot Revolution,” artificial humans display more humanity than their flesh and blood comrades.

Among my favorites from the collection was “For the Removal of Unwanted Guests,” a fantastically fun October jaunt about a man who buys a house only to have a witch and her black cat move in the first day. The story is simple, but the mood and Halloween flourishes tick all the right boxes for a delicious Autumn read. Another favorite was “Sisters of the Blessed Diving Order of Saint Peter and Saint Andrew,” in which an order of diving nuns tend to a sunken chapel and its aquatic denizens. One among their order finds a long dead sailor pinned beneath a shipwreck, and her desire to help him creates a theological crisis among her sisters.

A.C. Wise is writing some of the most fascinating, compelling, socially aware speculative fiction out there today. Check out The Kissing Booth Girl and everything else she’s writing. You’ll thank me later.

One thought on “A Review of The Kissing Booth Girl and Other Stories by A.C. Wise”