As I’ve mentioned previously, I’m relatively new to the zine world. I didn’t discover zines as a teenager in the ’90s when the movement was getting started, though I wish I had. I’ve come to zines as an adult, and which means I’m just not getting to discover zines and zinesters many of you have probably known about for a really long time. 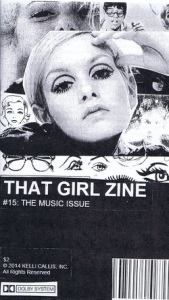 Kelli Callis is one of those zine makers. She’s been writing the excellent long-form That Girl Zine for quite a while, but I just now read my first issue of this perzine. I ordered #15: The Music Issue from the excellent Sweet Candy Distro & Press and was seriously impressed. Kelli writes a complete personal history of her musical tastes and discoveries, and the accompanying shifts for her fashion and social life over the years. Kelli is a fantastic writer, which is good, because this is a long zine at over 40 text-filled pages. She talks about her earliest musical memories, her discovery of new wave bands in the 80s, her collections of records and tapes, her insider/outsider experiences with the riot grrrl scene in the 90s, and so much more. She is honest about her roles in these spaces, neither inflating herself to seem more cool or aware at the time, nor being overly humble. She’s had some pretty rad experiences in some pretty rad spaces, and she’s also been an outsider and dealt with shit from insecure people, and she’s honest about all of it.

Kelli also writes about her experiences with religious circles growing up, and the ways this influenced her tastes and opportunities as certain points. Having grown up in fundamentalist religious home and church culture, this resonated strongly with me. The church and the friendships I had there at times limited my awareness and access to music and also opened me up to it. I threw out CDs because of Jesus, but the woman who introduced me to The Smiths, The Cure, Suzanne Vega, Depeche Mode, and so many other favorites went to an adult Sunday school class with my sister, so… beautiful tapestry or something.

Kelli talks a lot about the hypocrisy of various scenes, and the way fashion rules among supposed counter-cultures can be more restrictive and conforming than the mainstream they’re ostensibly providing an alternative to. We’ve all been there, and she’s spot on.

This zine is seriously awesome. If you love music, and have nostalgic memories of your musical discoveries over the years, of mix-tapes and hand-copied lyrics and the risk of buying a new album without knowing anything about it and the elation when it turned out to be badass and life-changing, this zine is for you.

One thought on “A Review of the That Girl Zine #15: The Music Issue by Kelli Callis”